The three-day forum, held from 16 to 18 January 2023 consisting of a one-day hybrid forum session and two days of working visits, is expected to provide nearly 200 attending delegates and 700 online participants with some high-level insights and understanding into the various challenges facing the halal industry in Malaysia and Indonesia.

“Both Indonesia and Malaysia are well-recognised Muslim countries globally. The bilateral ties between the two countries have continuously been fundamentally solid, as there exists a strong commitment on both sides to further strengthen the level of cooperation, to promote active engagements, and to seek mutually beneficial collaborations between the two countries,” said Dato’ Sri Norazman bin Ayob, Deputy Secretary General (Industry), Ministry of International Trade and Industry (MITI) during his Special Address.

The forum was also attended by His Excellency Hermono, the Ambassador Extraordinary and Plenipotentiary, Embassy of the Republic of Indonesia, Hairol Ariffein Sahari, the Chief Executive Officer of HDC and the heads of halal industry’s stakeholders.

Indonesia is the world’s most populous Muslim nation, with a very large and vibrant domestic halal market. With a total USD8.5 billion worth of halal exports, Indonesia is also the 10th largest exporter globally and the second largest exporter among the OIC countries, according to reports by the Indonesia Halal Lifestyle Centre and DinarStandard.

Indonesia is also Malaysia’s fifth largest Halal trading partner, with the Malaysian halal exports to Indonesia within the last five years (2017-2021) totaling MYR9.34 billion. The Food and beverages (F&B) sector represented the largest with a total value of MYR1.06 billion or 11.6% of total Malaysian halal export to Indonesia. The Halal Ingredients sector comes in second at MYR0.56 billion or 6.15%, followed by Cosmetics and Personal Care at MYR0.11 billion or 1.2%. Both F&B and Halal Ingredients combined constituted some 95% of the five-year total halal export worth MYR8.74 billion.

In 2021, HDC had conducted a market survey on halal’s market access in Indonesia, to apprehend and acquaint from the industry’s perspective the status, issues and challenges with regard to halal certification as well as the overall bilateral trade between Malaysia and Indonesia.

The HDC market survey exposed several key findings, including the fact that more than 90% of the Malaysian halal producers have yet to penetrate the local Indonesian market. Of the balance, only 9% have had more than five years of experience exporting to Indonesia. 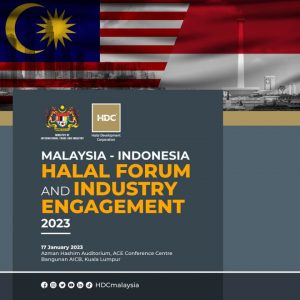 The survey also revealed that 75% of the respondents who do market their products and services in Indonesia, had faced a variety of challenges, including the complexity of BPOM’s halal application and the high pricing and local labeling requirements.

A strong unification of the local markets and brands that limited the acceptance of any imported products, is also listed high on the list of issues faced by Malaysian halal exporters, as well as the steep logistic costs and difficulty in finding the right local business partner.

“Through regular updates from the sharing of collective experiences and expertise in this forum, both JAKIM and BPJPH would be able to not only create a more cohesive business environment, but also increase the transparency and harmonisation within the formulation of halal regulations in both countries,” he added.

The forum, which is expected to be held annually, will be positioned as the best platform for Malaysian and Indonesian halal industry players to obtain not only the latest updates on the current and new halal regulations and requirements in both countries, but also to promote the overall halal trade between them.

“Most importantly, the forum will lay the foundation for a halal stakeholders and industry players from both countries, to collaborate and mutually work together to elevate the regional halal industry on to new heights, insya Allah,” he added.

Copyright © 2020 Halal Development Corporation Berhad
An agency under the Ministry of International Trade and Industry.
Wholly owned by Minister of Finance Incorporated

close
Start typing to see products you are looking for.
Scroll To Top